UCAN and Positive Money Tower Hamlets organised a public meeting, supported from Tower Hamlets Community Housing Association to promote public awareness of universal credit.  There are a number of myths and pitfalls members of the public need to know about it; managed migration is one of those things that this meeting is to address.

See you on 11 March 2020 at 7pm at Minerva Community Centre, Bethnal Green. 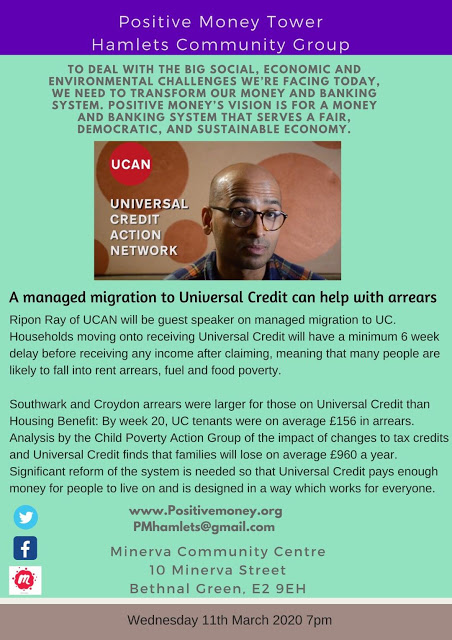 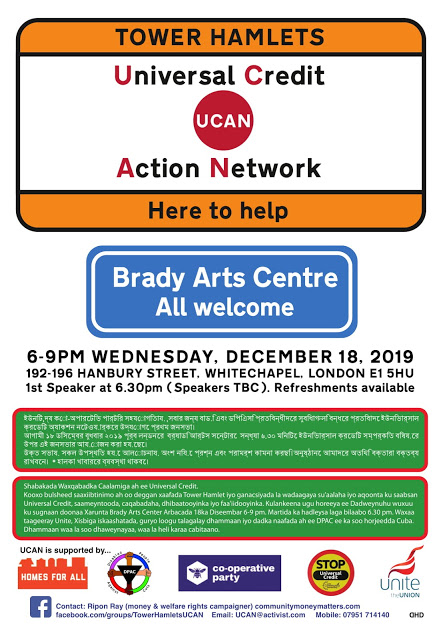 43% of children in Tower Hamlets are living in poverty according to Trust for London. 7.7% of the working population are unemployed in the borough. Whether to claim universal credit or not would be a big question for a lot of people.  In order to raise public awareness of universal credit in the local community, Universal Credit Action Network (UCAN), have organised a public meeting. You can hear from local campaigners and advice charities on the impact of welfare reform to the local community. If you are free on 18th December at 6pm, pop over at Brady Centre, Whitechapel. Refreshment provided!

Due to fear of being penalised by their employer,  a former debt adviser secretly explains working under Money Advice Pension Service (MaPS) contract. ' MaPS very nearly broke me, and I had to leave debt advice altogether in order to have a quality of life. ' 'The MaPS contract, and in particular its nonsensically onerous DAPA requirements, ended over 20 years of dedicated service with an organisation I had expected to retire working for. The MaPS contract nearly destroyed my physical and emotional health, and that of other long-term, incredibly hardworking debt advisers, who were also left with no option but to change their career direction after 10-20 years and leave to work for other charities or housing associations. The MaPS contract turned both debt advisers and clients into faceless commodities; it was all about the numbers without consideration for the impact its unrealistic and unachievable DAPA requirements have on both debt advice staff and, as a result, clients.
2 comments
Read more

On Monju's Hot Seat , Relaks Radio,  Ripon, on behalf of UCAN,  talked about the state of Britain today in the context of welfare system and the housing crisis.  Whilst on the show for two hours with Manju Haque, Ripon shared his thoughts on the way the welfare state has been transformed since its creation. In the 19th century, a period of great industrial change in Britain, welfare services were needed to improve the conditions of workers. Germany competed against Britain to develop such a system that was about advancing the safety-net for workers to compete in the global economic market.  Most of the  welfare services, however, were provided by churches, charities and trade unions. After the Second World War the state nationalised many of these services.There were mass social housing development programmes, the creation of the National Health Service and the welfare and social care functions provided by national governments.  Ripon went on to say that since
Post a Comment
Read more

UNIVERSAL CREDIT ACTION NETWORK   CORONAVIRUS IMPACT: A LESSON FOR US TO LEARN   Universal Credit: the wait for a first payment  - an Inquiry  Response to the Parliamentary Committee’s acceptance of evidence to call on Universal Credit:   The wait for a first payment —— ‘TO WHAT EXTENT HAVE THE MITIGATIONS THE GOVERNMENT HAS INTRODUCED SO FAR (E.G. ADVANCE PAYMENTS) HELPED TO REDUCE THE NEGATIVE IMPACT OF THE FIVE WEEK WAIT FOR UC CLAIMANTS?’ UCAN’S RESPONSE: A SUMMARY Universal Credit Action Network (UCAN) believes that a reduction from six to five weeks waiting period has not made any significant improvements to the financial position of claimants on Universal Credit (UC).   Peobody Trust, one of the largest housing associations in the country, mentioned in its published report in October 2019:  The Impact of Universal Credit , which outlines that 76% of Peobody Trust tenants on UC are in rent arrears. It also stated that five weeks waiting period ha
Post a Comment
Read more